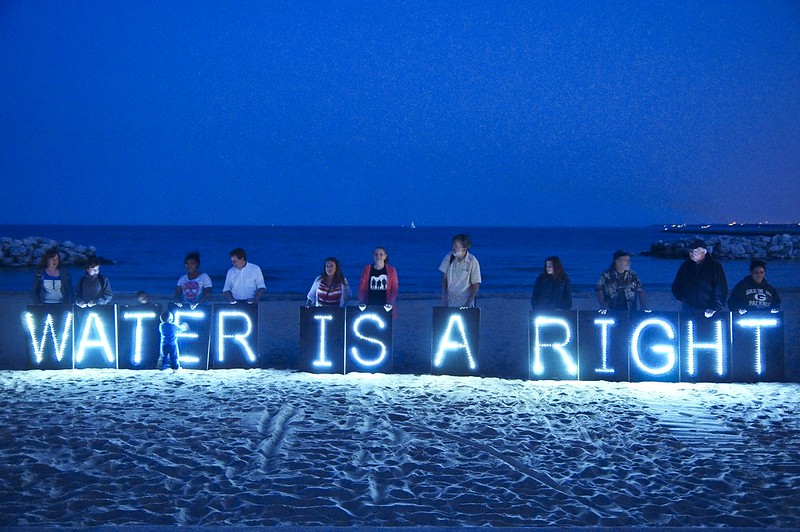 As climate change has increased the severity and frequency of drought in our country, large corporations should not be profiting off of water or water rights. Water should be affordable, easily accessible, and guarded from markets prone to manipulation and speculation that could cause real-world price increases. The announcement of the water futures trading received condemnation from the global water community, including the United Nations Special Rapporteur on the Human Right to Water who stated: “Water is already under extreme threat from a growing population, increasing demands and grave pollution from agriculture and mining industry in the context of worsening impact of climate change. . . I am very concerned that water is now being treated as gold, oil and other commodities that are traded on Wall Street futures markets.”

“Every American should agree: Clean, drinkable water is one of our most basic human rights,” said Rep. Khanna. “That’s why I’m proud to introduce this legislation with Senator Warren to prioritize human needs over corporate profits. Large companies and investors should not be allowed to use an essential public resource for their own gain. We have to stand together to protect our water.”

“Water is a human right and Wall Street shouldn’t be allowed to use this vital resource to make profits at the expense of hardworking Americans,” said Senator Warren. “My bill with Rep. Ro Khanna would protect water from Wall Street speculation and ensure one of our most essential resources isn’t auctioned off to the highest bidder.”

“With the climate crisis delivering historically devastating droughts across the West, it is clearer than ever that water should be treated as a scarce, essential resource, not a commodity for Wall Street and financial speculators,” said Food & Water Watch Executive Director Wenonah Hauter. “This groundbreaking legislation would put a lid on dangerous water futures trading before it creates a crisis, and it reinforces the fact that water must be managed as a public resource, not a corporate profit center. We thank Senator Warren and Representative Khanna for showing true leadership in the fight to protect access to safe, affordable water for all.”

“IATP welcomes the Future of Water Act’s amendment to the Commodity Exchange Act to exclude water as a tradable derivatives asset class under the regulations of the Commodity Futures Trading Commission,” said Steve Suppan, Senior Policy Analyst at the Institute for Agriculture & Trade Policy. “According to one of the CFTC’s core principles, derivatives contracts should not be traded if the underlying cash market for the commodity is susceptible to market manipulation. The CFTC has allowed the water future contract to be traded when the underlying cash market for that contract is price opaque and therefore susceptible to manipulation. The Future of Water Act will help protect water as a public good by preventing its price manipulation in the futures market.”

“No one should be allowed to gamble with the Great Lakes – but that’s exactly what Wall Street is trying to do by trading water futures,” said FLOW Executive Director Liz Kirkwood. “Allowing speculators to bet on water as a commodity like oil is a world-class threat to our world-class Great Lakes.”

Last year, the Chicago Mercantile Exchange (CME) announced it had certified the world’s first water futures contracts, which allow investors to purchase and sell futures contracts based on “water rights” prices in California. Market speculators are interested in financial derivatives based on water and water rights. Large contract holders would have a strong incentive to manipulate the water futures market for profit. Too much concentration in water markets by massive passive investors could lead to physical water hoarding and price increases. The Future of Water Act sends a powerful message that access to clean and affordable water is right and not a financial instrument to gouge American families, farmers, and ranchers.

A copy of the House legislation can be found here.