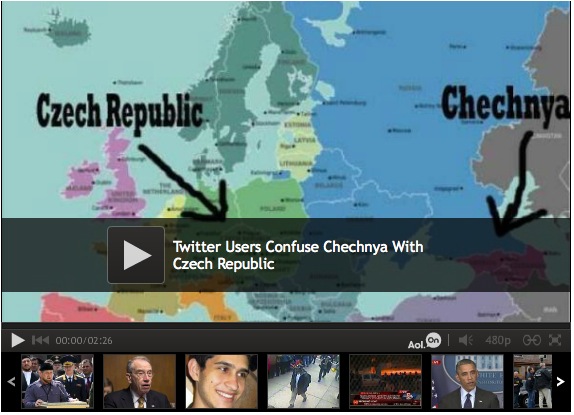 I mention to people fairly often that I don’t know where countries are because geography isn’t taught in US public schools. Here, we have something called “Social Studies” instead of history or geography, which is supposed to teach how people in different cultures live and think. But wow! The world is finite and countries change borders or names fairly infrequently. Can’t we take a few months in one of the early school years to focus on teaching US students where other countries are on the world map? People from every other country I’ve ever met learn this in school at a pretty young age. Only in the United States, our students don’t know.

America’s unmistakable ignorance is what prompted the Ambassador of the Czech Republic to issue a statement explaining to the American public that his country is not Chechnya, the country from which the Boston Marathon Bombers people hail. The Ambassador writes:

I am concerned to note in the social media a most unfortunate misunderstanding in this respect. The Czech Republic and Chechnya are two very different entities – the Czech Republic is a Central European country; Chechnya is a part of the Russian Federation.

Don’t you find it a little embarrassing to be called out on our deplorable, systemic educational ignorance by a foreign diplomat? I did, and this is why I’m offering a fix for our collective chagrin: Let’s wake ourselves up America, #learnmore together and improve public education.

Notes:
1 Thanks to Rob Fagerlund for bringing this story to my attention. Thanks to my friend Bryan Alexander for having other cool friends like Rob who share fascinating stuff.
2 The Czech Republic has in fact changed names twice in the past 100 years. It became Czechoslovakia in 1918 and the Czech Republic in 1992.

ABC News and the Huffington Post reported on this story.