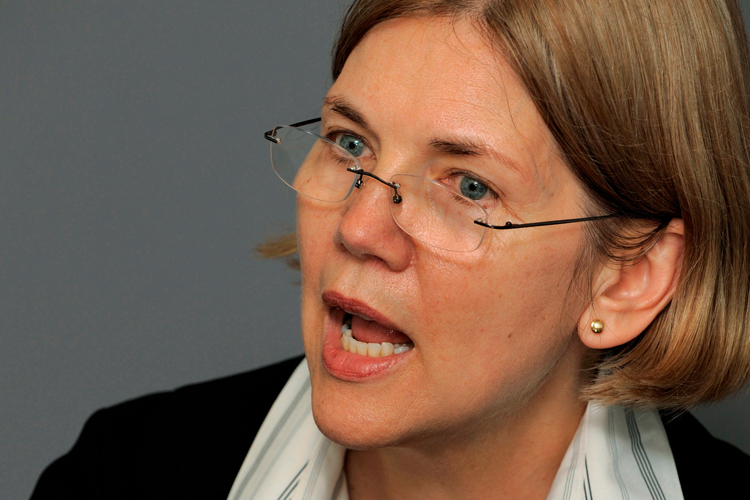 Right wing talking heads with their propaganda spouts open full force, need to know that Elizabeth Warren can’t be bested when all you’ve got to lob at her are innuendo, lies and bluster. Why is that? Because Elizabeth Warren tells the truth. She’s extremely well-spoken, she knows how to knock a lie flat on its face. She possesses impeccable recall of true facts and real data. I happen to also love the way Warren smiles like nobody’s business after she drops a huge truth-bomb on a challenger, which makes propaganda spinners trying to shut her up look like silly prancing bullies in tutus.

You know this lady’s last job before she became a federal Senator was at Harvard, where she taught bankruptcy law. Harvard mentions, “(Warren) has written eight books and more than a hundred scholarly articles dealing with credit and economic stress.”

Daily Kos reports on Warren’s tear-down of CNBC reporters trying to sell their lies to the public,

It’s been quite a day for Elizabeth Warren. First, her CFPB finally gets its director … Then she appears on CNBC’s The Squawk Box and responds to the hostile and ill-informed questioning of that crew…

In this video clip Sen. Warren patiently explains that Glass-Stegal is as relevant to the protection of family’s savings now as it was in 1933. Although there were big bank failures every 15 years before it was implemented that year, for 50 years until bank reforms were lifted in 1980 there were none. The system was, “steady and secure.” The senator says we need those protections back, and I believe she’s right. What do you think?