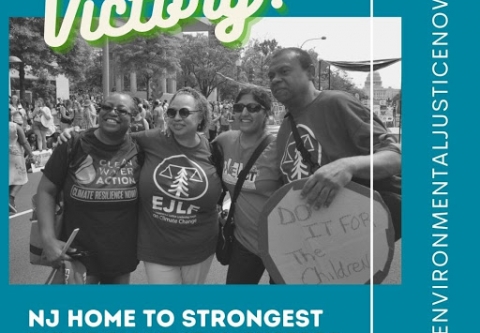 On Tuesday, 11 January 2022 from 7:00-9:00pm a panel discussion will be held via Zoom as a joint initiative of The Wei LLC’s EJ Chat Series, Diversity United and Ahavas Sholom Jewish Congregation on ways that residents of Newark, New Jersey and communities around the globe are being impacted by environmental justice issues which affect their health, lifestyles and economic well-being. Attendees will have the opportunity to participate in a live question and answer session following the panel, which will be led by Kimi Wei.

RSVP to attend the event

Ahavas Sholom is the last Jewish synagogue remaining in Newark, New Jersey’s largest city. Join the conversation while we examine the topic of environmental justice (also known as EJ, CEJ or environmental racism) from both global and local perspectives.

Panelist Wynnie-Fred Victor Hinds, a resident of Newark, is the Executive Director of the Weequahic Park Association and Co-Chair of the Newark Environmental Commission. Born in Haiti, she’s a Social and Environmental Justice Activist fluent in French, Haitian Creole, Spanish and English. She served as a Social Justice/Community Development Worker and Educator in South America, before relocating to the US.

Panelist Cynthia Mellon Co-Chairs the City of Newark Environmental Commission together with Ms. Hinds. She currently serves as Policy Consultant for the Climate Justice Alliance, is a NJ Environmental Justice Alliance board member and chairs the EJ Committee of the NJ Latino Action Network. She is a first generation Chicana who started the Ironbound’s thriving urban farming program as EJ Organizer for the Ironbound Community Corporation.

The State of New Jersey is uniquely distinguished in the United States’ justice landscape for having the strongest environmental justice laws in the entire nation. Much of the foundation for the defining these laws was laid by Newark community members over the decade plus of activism and advocacy which preceded their passage.

The following reading selections will provide you with a foundation in topics that will be discussed by panelists. You will find value in reading either of them, so choose the book that interests you most.

Read either of these books to learn the basics of Environmental Justice on a macro level.

Climate Justice: Hope, Resilience, and the Fight for a Sustainable Future by Mary Robinson

An urgent call to arms by one of the most important voices in the international fight against climate change, sharing inspiring stories and offering vital lessons for the path forward.

Holding her first grandchild in her arms in 2003, Mary Robinson was struck by the uncertainty of the world he had been born into. Before his fiftieth birthday, he would share the planet with more than nine billion people–people battling for food, water, and shelter in an increasingly volatile climate. The faceless, shadowy menace of climate change had become, in an instant, deeply personal.

Mary Robinson’s mission would lead her all over the world, from Malawi to Mongolia, and to a heartening revelation: that an irrepressible driving force in the battle for climate justice could be found at the grassroots level, mainly among women, many of them mothers and grandmothers like herself. From Sharon Hanshaw, the Mississippi matriarch whose campaign began in her East Biloxi hair salon and culminated in her speaking at the United Nations, to Constance Okollet, a small farmer who transformed the fortunes of her ailing community in rural Uganda, Robinson met with ordinary people whose resilience and ingenuity had already unlocked extraordinary change.

Powerful and deeply humane, Climate Justice is a stirring manifesto on one of the most pressing humanitarian issues of our time, and a lucid, affirmative, and well-argued case for hope.

“As advocate for the forgotten and the ignored, Mary Robinson has not only shone a light on human suffering, but illuminated a better future for our world.” -Barack Obama (less)

Energy Democracy: Advancing Equity in Clean Energy Solutions, edited by Denise Fairchild and Al Weinrub with contributions from other activists

A global energy war is underway. It is man versus nature, fossil fuel versus clean energy, the haves versus the have-nots, and, fundamentally, an extractive economy versus a regenerative economy. The near-unanimous consensus among climate scientists is that the massive burning of gas, oil, and coal is having a cataclysmic impact on our atmosphere and climate, and depleting earth’s natural resources, including its land, food, fresh water and biodiversity.

These climate and environmental impacts are particularly magnified and debilitating for low-income communities and communities of color that live closest to toxic sites, are disproportionately impacted by high incidences of asthma, cancer and rates of morbidity and mortality, and lack the financial resources to build resilience to climate change.

Energy democracy tenders a response and joins the environmental and climate movements with broader movements for social and economic change. Energy democracy is a way to frame the international struggle of working people, low income communities, and communities of color to take control of energy resources from the energy establishment and use those resources to empower their communities—literally providing energy, economically, and politically. Energy democracy is more important than ever as climate and social justice advocates confront a shocking political reality in the U.S.

This volume brings together racial, cultural, and generational perspectives. This diversity is bound together by a common operating frame: that the global fight to save the planet—to conserve and restore our natural resources to be life-sustaining—must fully engage community residents and must change the larger economy to be sustainable, democratic, and just. The contributors offer their perspectives and approaches to climate and clean energy from rural Mississippi, to the South Bronx, to Californian immigrant and refugee communities, to urban and semi-rural communities in the Northeast. Taken together, the contributions in this book show what an alternative, democratized energy future can look like, and will inspire others to take up the struggle to build the energy democracy movement.