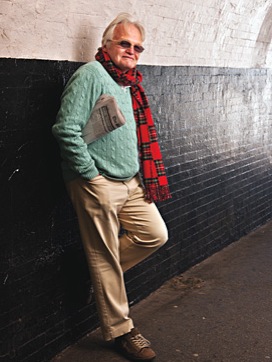 This morning, I have journalism on my mind. When I think of journalism, I think of excellence in delivering information so well that our understanding of an issue is instantly made much deeper; or when a skilled journalist shows us how relevant the topic is to our society and lives that our interest in it transforms from casual to compelling. I would like to share two examples of journalism brilliance. First, congratulations to Bob Braun, whose career and personal accomplishments are featured in Rutgers’ Winter 2013-14 alumni publication. He comments –

Ok, so the plaid scarf was the photographer’s idea, not mine. But I’m glad the writer emphasized two of the accomplishments of which I am proudest – reintroducing Paul Robeson to Rutgers and meeting the Culbertson family.

Bob has recently taken on the cause of championing the plight of Newark Public Schools as the community wages a battle to protect its schools as the program to eradicate them continues to be implemented by Public Ed Destroyer in Chief Cami Anderson aka Newark Schools Superintendent. The plan Cami’s implementing was created by heavy hitters Senator Cory Booker, Mark Zuckerberg and Chris Christie (my words, not Bob’s).

Bob does a beautiful job of exposing the horror of what’s being done to Newark students and community through this drive to dismantle public education here; the intrinsic injustice of it; and the fantastic speed and brutality with which this abuse is being carried out. Diane Ravitch admires Bob too. Second. I was directed to this profile piece about a Liberian immigrant as a wonderful illustration of creating a meaningful portrait of a character with just a few words. By tying our knowledge of certain societal phenomena to the description of her subject

Emmet Larry, 50, hoped for a pair of underwear, a bar of soap, maybe some soup. But what he really needed was a bike lock …

Refugee from Liberia. Victim of torture. No income.

Leonora opens the door to a world of knowledge about Larry. This technique is fascinating and in the day of 140 character communications, it also seems like an important knack to cultivate. What do you think?