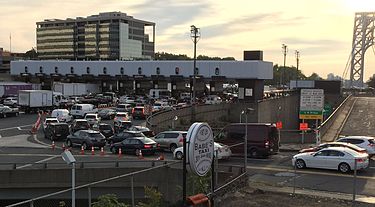 On Sunday, July 10 2022 the George Washington Bridge is going to introduce two changes that have been in the planning stages for several years: go completely cashless and also, eliminate the carpool rate. The GWB carpool rate gives a $8.25 discount to cars carrying three passengers or more over the bridge, making the $16.00 one way bridge toll to New York City, only $7.75 per trip.

The Port Authority of New York and New Jersey want us to believe that technology does not allow cashless lanes to count the number of passengers in a vehicle and charge the carpool rate when it is carrying 3 passengers. But Reps. Josh Gottheimer and Bill Pascrell have been pointing out since 2019 that “the technology exists and is being (used) in California, Georgia, and Massachusetts”. They have suggested that the cashless toll system should not be implemented until the carpool rate can continue to be offered to New Jersey commuters.

The Port Authority insists that the cashless toll system is good – and nobody disputes this. But aside from the extra financial cost to commuters who lose their carpool discount, there are environmental costs tha should be considered. Lacking a monetary incentive, carpoolers may return to solo commuting, which could add an enormous amount of traffic, and air pollution to the New York/New Jersey highways and airways.