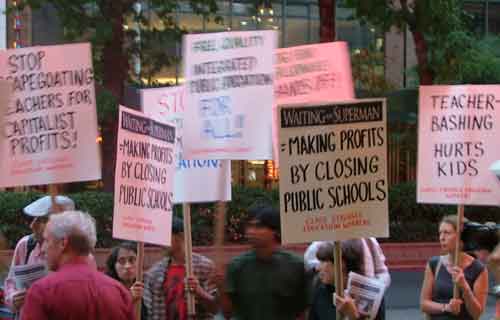 David Sirota helps us see that the true mission of the corporate backed charter school initiative is to bust unions and divert public funds earmarked for student education. The goal is to remove barriers to corporate control of society and for rich guys to get all the money in the world (or at least the US). These people didn’t get the memo that you can’t take it with you.

The bottom line is clear: In attempting to change the mission of public education from one focused on educating kids to one focused on generating private profit, corporate leaders in the “reform” movement are pursuing a shrewd investment strategy. Millions of dollars go into campaign contributions and propaganda outfits that push “reform,” and, if successful, those “reforms” guarantee Wall Street and their investment vehicles much bigger returns for the long haul.

…in the standard fairy tale sold as education journalism, these “reformers” are presented as having had an honest, entirely altruistic “epiphany” that led them to discover that “the reforms that are necessary” (ie., only the policies Wall Street deems acceptable) comprise “the civil rights issue of this era.”

In this framing, millionaires and billionaires trying to eviscerate traditional public education from their Manhattan office suites are the new Martin Luther Kings — even though the empirical data tell us that their schemes to charter-ize and privatize schools have been a systemic failure, often further disadvantaging the most economically challenged students of all (one example: see Stanford’s landmark study showing more than a third of kids whom reformers ushered into charter schools were educationally harmed by the move).

The truth, of course, is that for all the denialist agitprop to the contrary, corporate education “reformers” are motivated by self-interest, too.

…At the same time, major banks are reaping a windfall from “reformers’” successful efforts to take public money out of public schools and put it into privately administered charter schools.

Wealthy investors and major banks have been making windfall profits by using a little-known federal tax break to finance new charter-school construction. The program, the New Markets Tax Credit, is so lucrative that a lender who uses it can almost double his money in seven years…

The credit can even be piggybacked on other tax breaks for historic preservation or job creation. By combining the various credits with the interest from the loan itself, a lender can almost double his investment over the seven-year period.

No wonder JPMorgan Chase announced this week it was creating a new $325 million pool to invest in charter schools and take advantage of the New Markets Tax Credit.

What’s happening is actually old news just beginning to blossom in mainstream national dialogue. Also see:
David A. Love’s Profiteering and Union-Busting Repackaged as School Reform
Daily Kos’ Political Rhetoric (3): “Education reform?” STOP IT! Privatization or union-busting, please!
Where Are Progressives In The Fight To Save Public Schools? and
Why Romney, Obama are education twins